Each year, 10000 physicists descend on one of America’s finest inner cities in a ritual known as the American Physical Society’s March Meeting. If you are thinking that this is going to be one big nerd fest, you’re about right. From my experience, the backpacks, poster tubes, non-brand clothing, and distracted looks will be very easy to distinguish among the inhabitants of downtown LA (this year’s location) come next week.

However, with that many physicists, you will find a few trying to make science cool, or at least having fun while they try. One relatively untapped market in my opinion is montages. Take the Imagine Dragons song Believer, whose music video has lead signer Dan Reynolds mostly getting his ass kicked by veteran brawler Dolph Lundgren. Who says that training montages can’t also be for mental training? Sub out Dan for a young graduate student, replace Dolph with an imposing physicist, and substitute boxing with drama about writing equations on paper or a blackboard. Don’t believe it can be cool? I don’t blame you, but science montages have been done before, playing to science’s mystical side. And with sufficient experience, creativity, and money, I believe the sky is the limit.

But back to more concrete things. Having fun while trying to promote science is the main goal of the March Meeting Rock ‘n Roll Physics Sing-Along — a social and outreach event where a band of musicians, mostly scientists attending the meeting, plays well-known songs whose lyrics are substituted for science-themed prose. The audience then sings the new technically oriented lyrics along with the performers. Below is an example with the Smashmouth song I’m a Believer, but we play all kinds of genres, from power ballads to Britney Spears.

This year, we have an especially exciting line-up as we are joined by professional science entertainer, Einstein’s girl Gia Mora! Some of you may remember Gia from her performance with John Preskill at One Entangled Evening. She will join us to perform, among other hits, the funky E=mc^2:

The sing-along is run by the curator of all things related to physics songs, singer and songwriter Prof. Walter F. Smith of Haverford College. Adept at using songs to help teach physics, Walter has carefully collected a database of such songs dating back to the early 20th century; he believes that James Clerk Maxwell may have been the first song parody-er with his version of the lyrics to the Scotch Air Comin’ Thro’ the Rye. You can see James jamming alongside Emmy Noether, Paul Dirac, and Satyendra Bose below to questionable lyrics. The most well-known US physics song pioneer is Harvard grad Tom Lehrer, who recorded his first album in the 50s. Contrary to the general nature of scientists to be constantly worried about preserving their neutral academic self-image, Lehrer tackled edgy topics with creativity and humor.

The sing-along started in 2006, where the only accompaniment was a guitar and bongo, growing into a full rock band later on. The drums were first played by a Soviet-born physicist named Victor, and that has yet to change today despite it being a different person. The rest of the band this year consists of Walter, his wife Marian McKenzie on the flute, Lev Krayzman from Yale on the guitar, Prof. Esa Räsänen from Tampere University of Technology on the bass, Lenny Campanello from the University of Maryland on the keyboard, and of course the talented Gia Mora on voice. We hope that you can join us next week, as this year’s sing-along is sure to be one for the books! 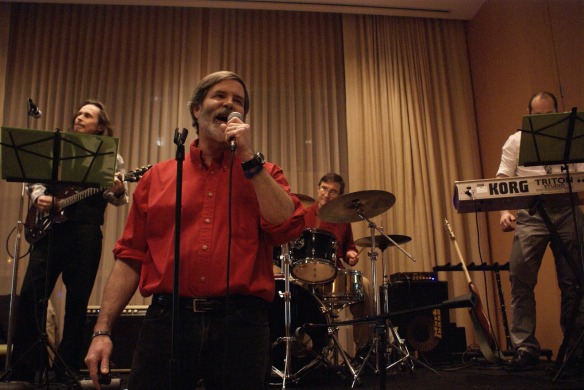